I'm worried about someone

If you’re reading this it’s likely that either you know for sure, or you have a feeling that someone you care about might be in an abusive relationship.

If you’re worried about someone you might have felt frustrated by the way they’re acting. You might not understand why they don’t just leave. An abuser will work hard to control and isolate the person or people they’re harming. The person you’re worried about might feel completely unable to leave. They may have been threatened with physical violence (including sexual violence). The abuser may also have threatened to kill them, any children in the family, a pet, or someone else.

As a friend or relative, you may not be fully aware of what is going on, but you might see changes in the person you are worried about.

There may be many outward signs of change, but here are some things you may notice:

Please don't think that domestic abuse only happens to 'other people'.  Anyone can experience it and might live with it for years or even decades.

It may be difficult for someone from outside of the relationship or family to believe that the person causing the harm is actually behaving in a detrimental way.  Because domestic abuse is about needing to be in control, they will be very good at controlling their own behaviour in front of other people.  There is never an excuse for domestic abuse or sexual violence. 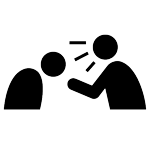 Your friend is hurting someone