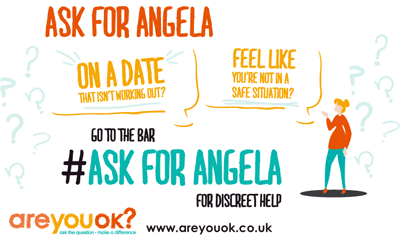 Torquay’s Best Bar None group, in partnership with Safer Communities Torbay, is helping to protect any person who may feel frightened during a date or by their partner whilst out in several of its harbour-side licensed premises, by launching a new scheme called ‘Ask for Angela’.

The scheme which was originally set up in Lincolnshire is being led and rolled out in a number of Torquay’s pubs by the local Best Bar None group.

It works by licensed premises displaying an ‘Ask for Angela’ poster or window sticker which signals that the pub, club, restaurant or bar is signed up to the scheme. In those premises staff know to take action if someone approaches the bar and asks if they can speak with ‘Angela’. If that happens the staff will discreetly offer to separate the individual asking for Angela from the person who is causing them discomfort or distress, and ensure that the person is able to leave safely. In any situation where a person becomes aggressive or is making threats to harm an individual or a member of staff, the police will be called immediately.

Obviously an initiative such as this will only be effective if all staff are fully aware of the campaign and have the confidence to act and support the customer if they are approached for help. Poster resources are available on request. Local businesses can download Ask for Angela campaign resources to use in their premises.

Best Bar None is a nationally accredited scheme that aims to recognise outstanding standards in licensed premises and efforts to reduce crime and improve community safety in an area. The scheme is supported by Devon, Cornwall and the Isles of Scilly’s Police and Crime Commissioner Alison Hernandez along with other key partners.